Women of the Law Alumnae

The Women of the Law (WOL) alumni group began in 2018 as a way to rekindle and honor the former female alumni group, Sisters in Law. The WOL is led by co-chairs Kate Blaine ‘03 and C. Kay McCall ‘81, as well as a team of committed volunteers who serve on the Steering Committee.

WOL aims to create a space for women alumni to network, learn together, and enjoy group events, as well as support the school’s efforts to recruit female students and promote diversity within the Law Center. Over the last year, the WOL group has raised thousands of dollars for a Women of the Law Scholarship, to be distributed in Spring of 2021, as well as the naming of a room in the new law building to honor outstanding women alumni.

To join and become an official member, donate $250+ ($100 if graduate of the last decade) annually to the Women of the Law Scholarship fund to benefit female scholars at UHLC today! For additional engagement, leadership, or event sponsorship opportunities, please contact Sondra Tennessee, stennessee@uh.edu 713-743-2079.

Give today and join fellow members to gather, connect with fellow alumnae, and hear from the first inaugural WOL scholarship recipient to hear the direct impact of philanthropy with UHLC

Women of the Law Fall Event

Discussing her new book
SHORTLISTED: WOMEN IN THE SHADOWS OF THE SUPREME COURT 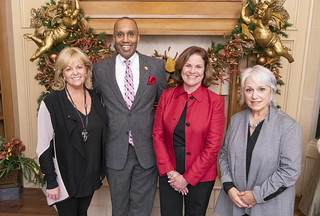 The WOL began hosting events in December 2018 with the first, Cocktails and Conversations event at the home of Committee Member, Kalli O’Malley. The event focused on the Me Too Movement with a conversation led by Committee Member and Immediate Past Chair of the Board of Directors of the State Bar of Texas, Laura Gibson, who discussed related history and employment litigation issues. Rosalie Hyde, a trauma specialist who has worked on issues related to women and children experiencing sexual assault and discrimination, also discussed why the victims felt empowered by the movement. Nearly 50 UHLC alumnae attended, shared their views and began to think through how to grow this new initiative focusing on empowering women in the legal profession. Photos from the event can be found here. 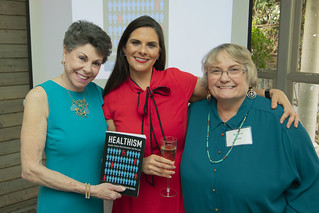 On April 20, 2019, the WOL hosted it’s second event, a Cocktails and Conversations focusing on health care discrimination, healthism, and vaccines. Dr. Susan H. Wootton, MD, of the McGovern Medical School at UTHealth and Prof. Jessica Roberts of the UH Law Center both discussed issues of public health versus private interest. Women from around Houston attended the event at Ouissie’s Table and learned about various issues that could potentially impact them and their families. Photos from the event can be found here. 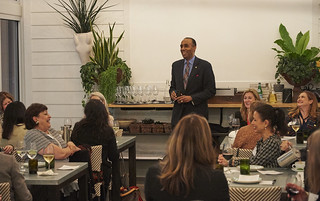 The first Women of the Law event of 2020 was held on January 28, 2020, and organized like a progressive dinner with a twist – speakers rotating from table to table along with courses of wine and food pairings from Sixty Vines. The conversationalists were from around Houston and various industries, from leaders of local non-profit organizations to in-house attorneys at major corporations, wealth strategists to federal judges, and everything in between. Fifty women attended and engaged with their alumnae peers and new contacts to learn from each other and build relationships for future opportunities. Photos from the event can be found here.