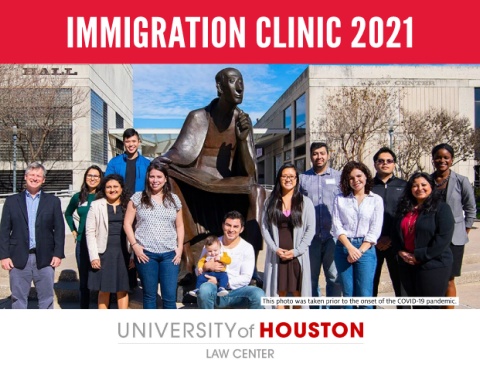 Vail founded the UH Law Center’s Immigration Law Clinic in 1999 and developed it into one of the largest in the nation. Friends and colleagues say Vail’s work at the clinic was perhaps the highest accomplishment in a career that included service as an immigration judge, running a solo immigration practice and providing legal assistance to immigrant advocacy groups.

As a volunteer with AmeriCorps VISTA, Vail assisted attorneys in the early 1980s in the landmark Plyer v. Doe Supreme Court case that established the right of undocumented children to attend public schools.  In 1994, Vail was recognized by the State Bar of Texas for the free legal services he provided to indigent clients.

Gordon Quan, a former Houston City Council Member, described Vail as a saint whose conscience forced him to step down as a federal immigration judge, a post he held from 1995 to 1999. “The guy gave up his judgeship because he felt the laws were unjust – I mean, how many people do that?” said Quan, an immigration attorney. “He felt he was being a tool for the government in an unfair system, and everybody respected him for doing what he thought was morally correct.”

Before this death, Vail was nominated by 108 lawyers in Houston and across the state for an immigration award issued annually by the National Lawyers Guild. He was posthumously awarded the National Immigration Project Carol King Award on October 18, 2008 by the Guild.