May 14, 2019 — Janet Langford Carrig, a longtime senior legal executive at ConocoPhillips, told students to be true to who they are and follow their own moral compass as they enter the practice of law. Carrig spoke at the University of Houston Law Center Commencement Ceremony on Sunday at the Fertitta Center. The Class of 2019 included 229 J.D. candidates and 57 LL.M. graduates.

"You have a job ahead of you much harder than what you have faced in law school," Carrig said. "The job I recommend is getting to know yourself - intimately, deeply, granularly — without false humility. Take your interests seriously - they may well be a window into something deeper. Take inventory now and check in with it as your career unfolds."

Carrig served as Senior Vice President, Legal, General Counsel and Corporate Secretary of ConocoPhillips from August 2007 through September 2018. She is an experienced executive who has worked extensively in both the energy and consumer products industries, and managed every staff function except finance.  She was the recipient of the Texas General Counsel Forum's Lifetime Achievement Award, the National Law Journal's 50 Most Influential Women Lawyers in America and many other accolades.

"Another reason it's important to be authentic is so you can bring your special talents to the world," Carrig said. "This is why I say know yourself without false humility. You have a special gift and the world needs it. It may not seem like a lot, but it is.

"The second reason to know yourself is so that you will make good decisions — by which I mean decisions you are happy with in retrospect."

Dean Leonard M. Baynes offered his congratulations and encouraged students to become ethical and effective advocates for their clients and to reap the benefits of their hard work.

"Graduates, your professors have fundamentally transformed each one of you by teaching you how to think like lawyers," Baynes said. "Under the faculty's tutelage, you have learned how to write precisely, to analyze rigorously, to advocate persuasively, and to uphold the highest of the legal profession.

"You can now take these tools and transform the world by representing individual clients to secure justice andd by providing the legal architecture of global and national social, political and economic movements."

Greetings from the UH System Board of Regents were provided by Paula Mendoza.

"The UH Law Center and the University of Houston have prepared you, like no other generation before you, not just to compete, but to be leaders," Mendoza said. "I know in my heart that you will make a difference in your workplace and your communities."

Alexandra Grafton served as the J.D. class speaker and expressed gratitude to classmates for helping her see multiple sides to an issue.

"This is the last time we all get to sit together as one class, all of us on the same side of the aisle," Grafton said. "After today, many of us are going to identify as adversaries. When I come across you as the opposition, I hope that I can remember that there was a time when we all sat in the same classroom with the same set of facts before us, trying to answer the same questions.

"There was something that shaped every one of your experiences differently from mine there in the same classroom. Looking at the same facts, we arrived at different answers. I hope that I can remember that whether we are here as classmates or out there as opponents, there is so much to learn from those differences."

Rebecca Mei Chen Lee spoke on behalf of the LL.M. class. She said that the friendships she formed at the Law Center will last for a lifetime.

"The kindness and helpfulness that the students here have shown is remarkable," Lee said. "I think these acts of kindness and solidarity that Law Center students have is what defines us and is something that will stay with me long after the academic lessons have faded."

Victor Wright '98, president-elect of the UH Law Alumni Association, welcomed graduates to the Law Center's network of alumni and suggested that they stay involved with the Law Center whether being an alumni mentor, volunteering for advocacy programs or in other capacities.

"This is an exciting time and you're joining the ranks of alums who are very excited and passionate about the things that lie ahead for this law school," Wright said. "We believe the best is yet to come."

Following the ceremony was a reception in the TDECU Stadium Club Room. 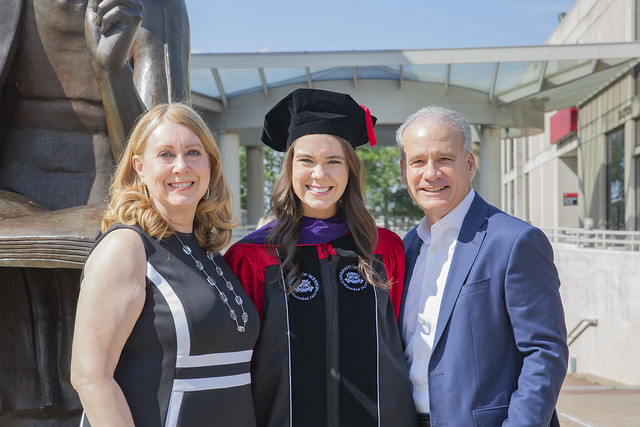 Back to the News Homepage