Lawyers aim for the moon and raise nearly $600,000 at 43rd Annual University of Houston Law Gala

Provost Paula Myrick Short, Dean Leonard M. Baynes, and Peter Taaffe ’97, vice-chairman of the UH System Board of Regents, enjoy the evening under the gala’s moon and stars.

April 3, 2019 — With a theme of “Fly Me to the Moon,” the University of Houston Law Center’s 43rd Annual Law Gala & Auction was out of this world Saturday evening, beginning with a countdown to a spectacular rocket launch video and ending with a Frank Sinatra impersonator. About $579,000 was raised along the way for scholarships and other programs.

“The gala was a terrific night!” said Dean Leonard M. Baynes. “It was a rare opportunity for the UHLC community — alumni, faculty, staff and friends to come together and celebrate the Law Center’s success. It also is an important fundraiser to support the activities of the Law Center to keep it a top tier law school. Many thanks go to the gala chairs, Bob Sergesketter and Denise Castillo-Rhodes, who did an outstanding job in envisioning the theme and securing donations. Also many thanks go to Hope Young and her team for flawless execution.”

More than 600 alumni, faculty, judges, lawyers, and friends of the Law Center filled the ballroom at the Post Oak Hotel at Uptown Houston. A “Lunar Bar” welcomed guests and set the stage for the night’s motif of moon and stars with “craters” on the floor to commemorate the 50th anniversary of man’s landing on the moon; an ice sculpture rendering of the proposed new Law Center building added a more earthbound touch to the décor.

After a luxury “wine pull” and dinner, guests with paddles in hand were ready for the live auction with items ranging from a bourbon tasting dinner for 10 with Texas Supreme Court Justice Jeff Brown ’95 to weeklong vacation getaways to Colorado and Montana. The finale, and highlight of the auction, was a Golden Retriever puppy named Olivia Benson (“Law & Order),” who won the hearts of the crowd and fetched more than $12,000 for the Law Center.

Guests ended the evening with music and dancing at an after-Gala party in a lounge setting that might have featured Sinatra himself in his heyday.

“With attendance and revenue numbers the highest in over a decade, the 2019 Law Gala was a huge success, and the energy level was through the roof,” said Sergesketter ’95. “Being asked to serve as gala chairs at a time when the law school is on the cusp of breaking ground for a new law building was a tremendous honor.

“We had a vision of where we wanted to take this gala, and we saw it come together on Saturday night. But none of this would have been possible without the generosity and hard work of our past gala chairs, the host committee, the law firms that sponsored the event, the alumni who donated and bid on the terrific auction prizes, and the full-time UH team who made it all happen. We hope people will remember this year’s gala for years to come; Denise and I certainly will.”

In a celebration of life and legacy before the auction and musical entertainment, Justice Brown, who was recently nominated for a federal judgeship, introduced a video tribute and announced a new scholarship fund in the name of Stephen Zamora, a former Law Center dean and longtime professor who passed away in July 2016. 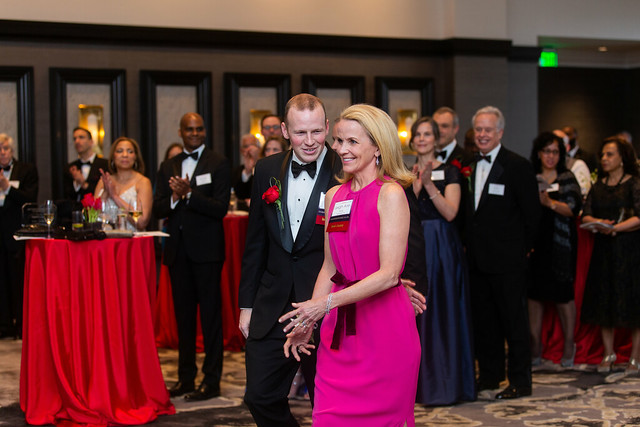